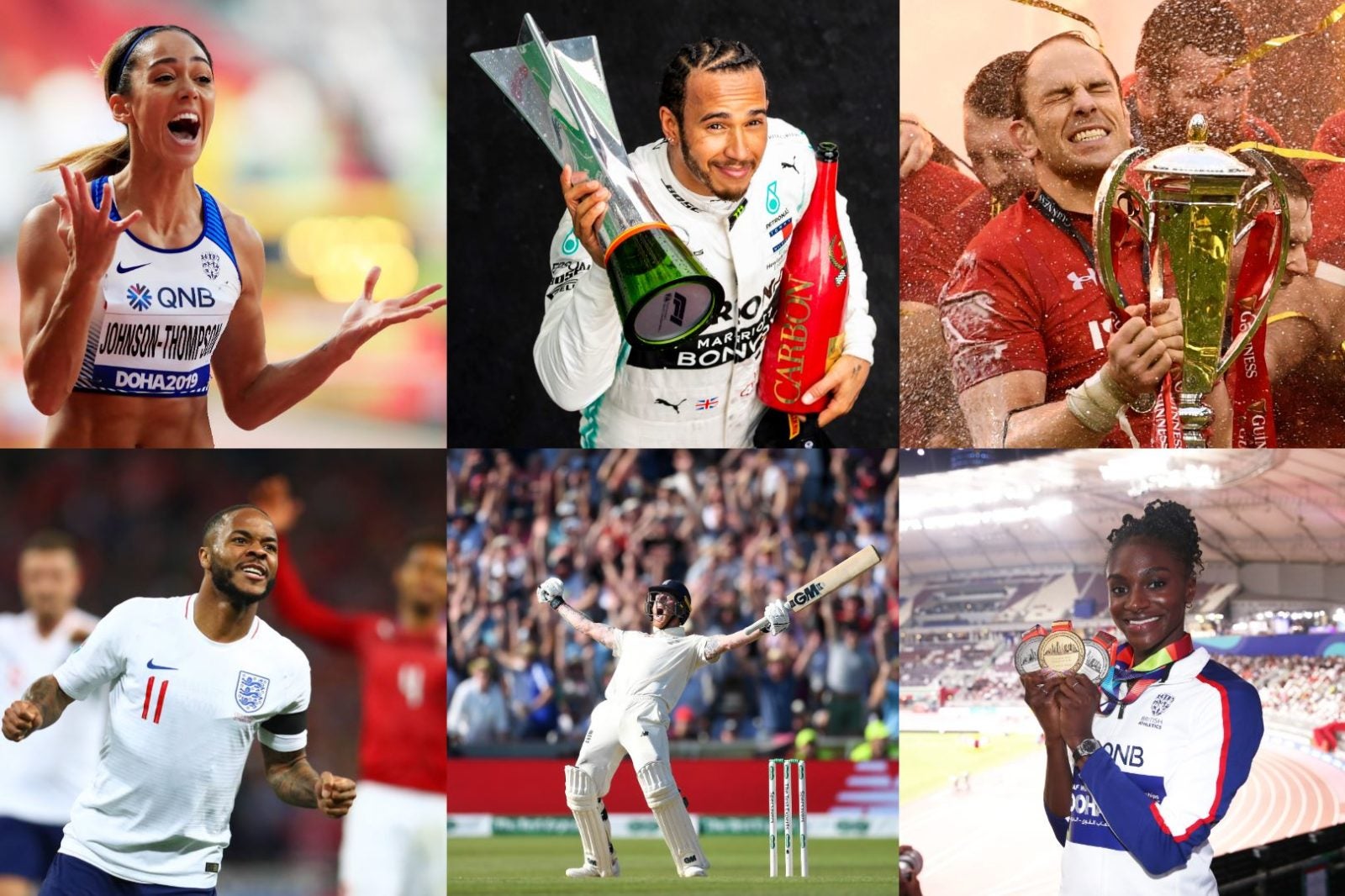 Sports of all kinds play an important part in many people’s lives. There are several sports that are particularly popular in the UK. Many sporting events take place at major stadiums such as Wembley Stadium in London and the Millennium Stadium in Cardiff.

The UK has hosted the Olympic Games on three occasions: 1908, 1948 and 2012. The main Olympic site for the 2012 Games was in Stratford, East London. The British team was very successful, across a wide range of Olympic sports, finishing third in the medal table.

Athletes from the United Kingdom, all but three of its overseas territories, and the three Crown dependencies, compete in the Olympic Games as part of the team Great Britain or Team GB. It has sent athletes to every Summer and Winter Games, along with France and Switzerland, since the start of the Olympics’ modern era in 1896, including the 1980 and 1984 Summer Olympics, which were boycotted by a number of other nations on each occasion. From 1896 to 2018 inclusive, Great Britain has won 851 medals at the Summer Olympic Games, and another 32 at the Winter Olympic Games. It is the only national team to have won at least one Gold Medal at every Summer Games, lying third globally in the winning of total medals, surpassed only by the United States and the former Soviet Union, and fourth behind Germany when considering gold medal totals.

It is organised by the British Olympic Association (BOA) as the National Olympic Committee for the UK. While the International Olympic Committee (IOC) and BOA both refer to the team as ‘Great Britain’ and the team uses the brand name Team GB, the BOA explains that it is a contraction of the full title, the Great Britain and Northern Ireland Olympic Team. Great Britain was one of 14 teams to compete in the first Games, the 1896 Summer Olympics in Athens, and is one of only three nations (France and Switzerland being the others) to have competed at every Summer and Winter Olympic Games.

The Paralympic Games for 2012 were also hosted in London. The Paralympics have their origin in the work of Dr Sir Ludwig Guttman, a German refugee, at the Stoke Mandeville hospital in Buckinghamshire. Dr Guttman developed new methods of treatment for people with spinal injuries and encouraged patients to take part in exercise and sport.

Sir Ian Botham (1955–) captained the English cricket team and holds a number of English Test cricket records, both for batting and for bowling.

Jayne Torvill (1957–) and Christopher Dean (1958–) won gold medals for ice dancing at the Olympic Games in 1984 and in four consecutive world championships.

Sir Steve Redgrave (1962–) won gold medals in rowing in five consecutive Olympic Games and is one of Britain’s greatest Olympians.

Baroness Tanni-Grey Thompson (1969–) is an athlete who uses a wheelchair and won 16 Paralympic medals, including 11 gold medals, in races over five Paralympic Games. She won the London Marathon six times and broke a total of 30 world records.

Dame Kelly Holmes (1970–) won two gold medals for running in the 2004 Olympic Games. She has held a number of British and European records.

Dame Ellen MacArthur (1976–) is a yachtswoman and in 2004 became the fastest person to sail around the world singlehanded.

Sir Chris Hoy (1976–) is a Scottish cyclist who has won six gold and one silver Olympic medals. He has also won 11 world championship titles.

David Weir (1979–) is a Paralympian who uses a wheelchair and has won six gold medals over two Paralympic Games. He has also won the London Marathon six times.

Jessica Ennis (1986–) is an athlete. She won the 2012 Olympic gold medal in the heptathlon, which includes seven different track and field events. She also holds a number of British athletics records.

Andy Murray (1987–) is a Scottish tennis player who in 2012 won the men’s singles in the US Open. He is the first British man to win a singles title in a Grand Slam tournament since 1936. In the same year, he won Olympic gold and silver medals and was runner-up in the men’s singles at Wimbledon.

Ellie Simmonds (1994–) is a Paralympian who won gold medals for swimming at the 2008 and 2012 Paralympic Games and holds a number of world records. She was the youngest member of the British team at the 2008 Games.

Cricket originated in England and is now played in many countries.

Games can last up to five days but still result in a draw! The idiosyncratic nature of the game and its complex laws are said to reflect the best of the British character and sense of fair play.

You may come across expressions such as ‘rain stopped play’, ‘batting on a sticky wicket’, ‘playing a straight bat’, ‘bowled a googly’ or ‘it’s just not cricket’, which have passed into everyday usage.

The most famous competition is the Ashes, which is a series of Test matches played between England and Australia.

Football is the UK’s most popular sport. It has a long history in the UK and the first professional football clubs were formed in the late 19th century.

England, Scotland, Wales and Northern Ireland each have separate leagues in which clubs representing different towns and cities compete. The English Premier League attracts a huge international audience. Many of the best players in the world play in the Premier League. Many UK teams also compete in competitions such as the UEFA (Union of European Football Associations) Champions League, against other teams from Europe. Most towns and cities have a professional club and people take great pride in supporting their home team. There can be great rivalry between different football clubs and among fans.

Each country in the UK also has its own national team that competes with other national teams across the world in tournaments such as the FIFA (Fédération Internationale de Football Association) World Cup and the UEFA European Football Championships. England’s only international tournament victory was at the World Cup of 1966, hosted in the UK.

Football is also a popular sport to play in many local communities, with people playing amateur games every week in parks all over the UK.

Rugby originated in England in the early 19th century and is very popular in the UK today. There are two different types of rugby, which have different rules: union and league. Both have separate leagues and national teams in England, Wales, Scotland and Northern Ireland (who play with the Irish Republic).

Teams from all countries compete in a range of competitions. The most famous rugby union competition is the Six Nations Championship between England, Ireland, Scotland, Wales, France and Italy. The Super League is the most well-known rugby league (club) competition.

There is a very long history of horse racing in Britain, with evidence of events taking place as far back as Roman times.

The sport has a long association with royalty. There are racecourses all over the UK. Famous horse-racing events include: Royal Ascot, a five-day race meeting in Berkshire attended by members of the Royal Family; the Grand National at Aintree near Liverpool; and the Scottish Grand National at Ayr.

There is a National Horseracing Museum in Newmarket, Suffolk.

Golf is one of the more popular sports across the United Kingdom (UK). In all of Europe, England has the highest number of registered golf courses as of 2017 by far, with a total of 1,872, followed by Germany with 731, not even half that number. Scotland hosts 560 courses, Ireland has 405 and Wales has 145 courses

The modern game of golf can be traced back to 15th century Scotland. It is a popular sport played socially as well as professionally. There are public and private golf courses all over the UK. St Andrews in Scotland is known as the home of golf. The Open Championship is the only ‘Major’ tournament held outside the United States. It is hosted by a different golf course every year.

Modern tennis evolved in England in the late 19th century. The first tennis club was founded in Leamington Spa in 1872. The most famous tournament hosted in Britain is The Wimbledon Championships, which takes place each year at the All England Lawn Tennis and Croquet Club. It is the oldest tennis tournament in the world and the only ‘Grand Slam’ event played on grass.

The tournament traditionally took place over two weeks in late June and early July, starting on the last Monday in June and culminating with the Ladies’ and Gentlemen’s Singles Finals, scheduled for the Saturday and Sunday at the end of the second week. However, recent changes to the tennis calendar have seen the event moved back by a week to begin in early July. Five major events are held each year, with additional junior and invitational competitions also taking place.

Sailing continues to be popular in the UK, reflecting our maritime heritage.

Many sailing events are held throughout the UK, the most famous of which is at Cowes on the Isle of Wight. Rowing is also popular, both as a leisure activity and as a competitive sport. There is a popular yearly race on the Thames between Oxford and Cambridge Universities.

There is a long history of motor sport in the UK, for both cars and motor cycles. Motor-car racing in the UK started in 1902. The UK continues to be a world leader in the development and manufacture of motor-sport technology.

Skiing is increasingly popular in the UK. Many people go abroad to ski and there are also dry ski slopes throughout the UK. Skiing on snow may also be possible during the winter. There are five ski centres in Scotland, as well as Europe’s longest dry ski slope near Edinburgh.