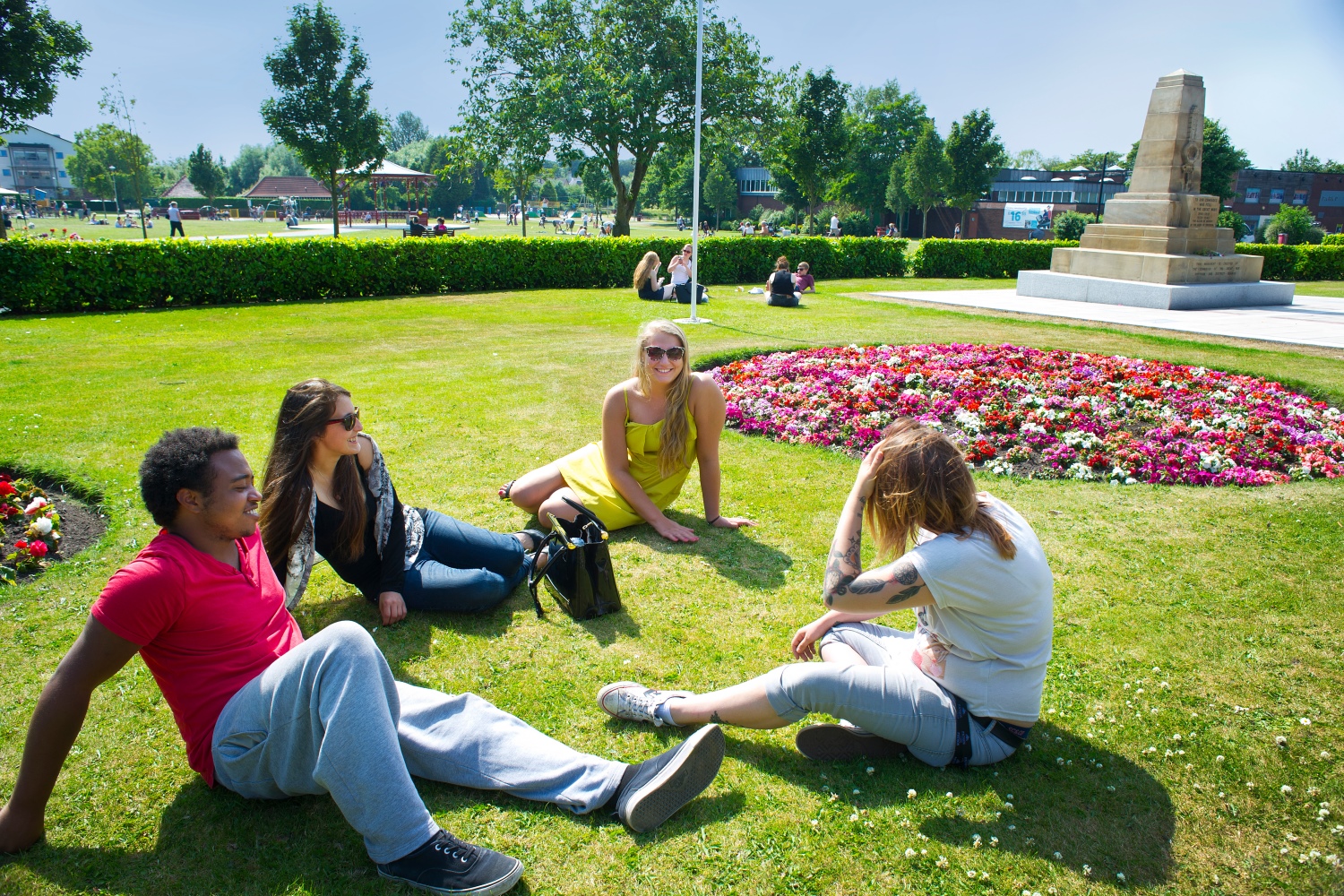 People in the UK spend their leisure time in many different ways.

A lot of people have gardens at home and will spend their free time looking after them. Some people rent additional land called ‘an allotment’, where they grow fruit and vegetables. Gardening and flower shows range from major national exhibitions to small local events. Many towns have garden centres selling plants and gardening equipment.

There are famous gardens to visit throughout the UK, including Kew Gardens, Sissinghurst and Hidcote in England, Crathes Castle and Inveraray Castle in Scotland, Bodnant Garden in Wales, and Mount Stewart in Northern Ireland.

Kew gardens
The countries that make up the UK all have flowers which are particularly associated with them and which are sometimes worn on national saints’ days:

There are many different places to go shopping in the UK. Most towns and cities have a central shopping area, which is called the town centre. Undercover shopping centres are also common – these might be in town centres or on the outskirts of a town or city. Most shops in the UK are open seven days a week, although trading hours on Sundays and public holidays are generally reduced. Many towns also have markets on one or more days a week, where stallholders sell a variety of goods.

The biggest and best of the shopping centres are the Metrocentre in Gateshead, The Trafford Centre in Manchester, Westfield Stratford City (next to the Olympic Park built for the London 2012 Olympics) and Bluewater (just outside London in Dartford).

Most large towns will have a department store selling household goods and clothing: either an independent or part of a larger chain like John Lewis, Debenhams or House of Fraser. In London, go to Selfridges and Harvey Nichols for top-end fashion, Liberty for luxury gifts, Harrods for its famous Food Hall – and John Lewis for everything else from a needle and thread to a huge American side-by-side refrigerator.

Many people in the UK enjoy cooking. They often invite each other to their homes for dinner. A wide variety of food is eaten in the UK because of the country’s rich cultural heritage and diverse population.

There are a variety of foods that are traditionally associated with different parts of the UK:

England: Roast beef, which is served with potatoes, vegetables, Yorkshire puddings (batter that is baked in the oven) and other accompaniments. Fish and chips are also popular.

Wales: Welsh cakes – a traditional Welsh snack made from flour, dried fruits and spices, and served either hot or cold.

The UK has had a major influence on modern cinema. Charlie Chaplin, famous for playing a tramp character
Films were first shown publicly in the UK in 1896 and film screenings very quickly became popular. From the beginning, film makers became famous for clever special effects and this continues to be an area of British expertise. From the early days of the cinema, British actors have worked in both the UK and USA. Sir Charles (Charlie) Chaplin became famous in silent movies for his tramp character and was one of many British actors to make a career in Hollywood.

British studios flourished in the 1930s. Eminent directors included Sir Alexander Korda and Sir Alfred Hitchcock, who later left for Hollywood and remained an important film director until his death in 1980. During the Second World War, British movies (for example, In Which We Serve) played an important part in boosting morale. Later, British directors including Sir David Lean and Ridley Scott found great success both in the UK and internationally.

The 1950s and 1960s were a high point for British comedies, including Passport to Pimlico, The Ladykillers and, later, the Carry On films.

Many of the films now produced in the UK are made by foreign companies, using British expertise. Some of the most commercially successful films of all time, including the two highest-grossing film franchises (Harry Potter and James Bond), have been produced in the UK. Ealing Studios has a claim to being the oldest continuously working film studio facility in the world. Britain continues to be particularly strong in special effects and animation. One example is the work of Nick Park, who has won four Oscars for his animated films, including three for films featuring Wallace and Gromit.

The traditions of comedy and satire, and the ability to laugh at ourselves, are an important part of the UK character. Medieval kings and rich nobles had jesters who told jokes and made fun of people in the Court. Later, Shakespeare included comic characters in his plays. In the 18th century, political cartoons attacking prominent politicians – and, sometimes, the monarch or other members of the Royal Family – became increasingly popular. In the 19th century, satirical magazines began to be published. The most famous was Punch, which was published for the first time in the 1840s. Today, political cartoons continue to be published in newspapers, and magazines such asPrivate Eye continue the tradition of satire.

Comedians were a popular feature of British music hall, a form of variety theatre which was very common until television became the leading form of entertainment in the UK. Some of the people who had performed in the music halls in the 1940s and 1950s, such as Morecambe and Wise, became stars of television.

Television comedy developed its own style. Situation comedies, or sitcoms, which often look at family life and relationships in the workplace, remain popular. Satire has also continued to be important, with shows like That Was The Week That Was in the 1960s and Spitting Image in the 1980s and 1990s. In 1969, Monty Python’s Flying Circus introduced a new type of progressive comedy. Stand-up comedy, where a solo comedian talks to a live audience, has become popular again in recent years.

Many different television (TV) channels are available in the UK. Some are free to watch and others require a paid subscription. British television shows a wide variety of programmes. Popular programmes include regular soap operas such as Coronation Street and EastEnders. In Scotland, some Scotland-specific programmes are shown and there is also a channel with programmes in the Gaelic language. There is a Welsh-language channel in Wales. There are also programmes specific to Northern Ireland and some programmes broadcast in Irish Gaelic.

Everyone in the UK with a TV, computer or other medium which can be used for watching TV must have a television licence. One licence covers all of the equipment in one home, except when people rent different rooms in a shared house and each has a separate tenancy agreement – those people must each buy a separate licence. People over 75 can apply for a free TV licence and blind people can get a 50% discount. You will receive a fine of up to £1,000 if you watch TV but do not have a TV licence.

The money from TV licences is used to pay for the British Broadcasting Corporation (BBC). This is a British public service broadcaster providing television and radio programmes. The BBC is the largest broadcaster in the world. It is the only wholly state-funded media organisation that is independent of government. Other UK channels are primarily funded through advertisements and subscriptions.

Social networking websites such as Facebook and Twitter are a popular way for people to stay in touch with friends, organise social events, and share photos, videos and opinions. Many people use social networking on their mobile phones when out and about.

Internet penetration in the UK is one of the highest in Europe with nearly 85% of people being connected to the internet. There are increasing numbers of highly connected individuals and organisations who have access to the internet and social media at work, at home and on the move.

In general, British SMEs are quite familiar with the use of social media. In fact, they use a wide range of social media networks for business purposes and acknowledge the way that different networks should be used for specific purposes. Most SMEs are open to developing new skills and acquiring further training.

Public houses (pubs) are an important part of the UK social culture. Many people enjoy meeting friends in the pub. Most communities will have a ‘local’ pub that is a natural focal point for social activities. Pub quizzes are popular. Pool and darts are traditional pub games. To buy alcohol in a pub or night club you must be 18 or over, but people under that age may be allowed in some pubs with an adult. When they are 16, people can drink wine or beer with a meal in a hotel or restaurant (including eating areas in pubs) as long as they are with someone over 18.

Pubs are usually open during the day from 11.00 am (12 noon on Sundays). Night clubs with dancing and music usually open and close later than pubs. The licensee decides the hours that the pub or night club is open.

In the UK, people often enjoy a gamble on sports or other events. There are also casinos in many places. You have to be 18 to go into betting shops or gambling clubs. There is a National Lottery for which draws are made every week. You can enter by buying a ticket or a scratch card. People under 16 are not allowed to participate in the National Lottery.

About £14.5bn was spent in Great Britain on gambling between October 2017 and September 2018, according to the Gambling Commission – the industry regulator. That figure includes everything from National Lottery tickets and bingo games to betting on horse racing or football.

A lot of people in the UK have pets such as cats or dogs. They might have them for company or because they enjoy looking after them. It is against the law to treat a pet cruelly or to neglect it. All dogs in public places must wear a collar showing the name and address of the owner. The owner is responsible for keeping the dog under control and for cleaning up after the animal in a public place.

Vaccinations and medical treatment for animals are available from veterinary surgeons (vets). There are charities which may help people who cannot afford to pay a vet.