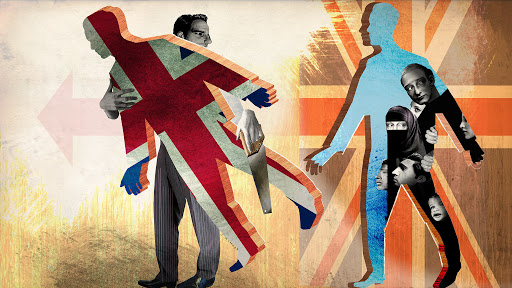 The UK today is a more diverse society than it was 100 years ago, in both ethnic and religious terms. Post-war immigration means that nearly 10% of the population has a parent or grandparent born outside the UK. The UK continues to be a multinational and multiracial society with a rich and varied culture. This section will tell you about the different parts of the UK and some of the important places. It will also explain some of the UK’s traditions customs and some of the popular activities that take place.

THE NATIONS OF THE UK

The UK is located in the north west of Europe. The longest distance on the mainland is from John O’Groats on the north coast of Scotland to Land’s End in the south-west corner of England. It is about 870 miles (approximately 1,400 kilometres). Most people live in towns and cities but much of Britain is still countryside. Many people continue to visit the countryside for holidays and for leisure activities such as walking, camping and fishing.

MAIN CITIES OF THE UK

Capital cities
The capital city of the UK is London

Scotland: the capital city of Scotland is Edinburgh

Wales: the capital city of Wales is Cardiff

The currency in the UK is the pound sterling (symbol £). There are 100 pence in a pound. The denominations (values) of currency are:

Northern Ireland and Scotland have their own banknotes, which are valid everywhere in the UK. However, shops and businesses do not have to accept them.

The data below shows how the population of the UK has changed over time. (Source: National Statistics)

In Scotland, Gaelic is spoken in some parts of the Highlands and Islands, and in Northern Ireland some people speak Irish Gaelic.

The population is very unequally distributed over the four parts of the UK. England more or less consistently makes up 84% of the total population, Wales around 5%, Scotland just over 8% and Northern Ireland less than 3%.

People in the UK are living longer than ever before. This is due to improved living standards and better health care. There are now a record number of people aged 85 and over. This has an impact on the cost of pensions and health care.

The UK population is ethnically diverse and changing rapidly, especially in large cities such as London. It is not always easy to get an exact picture of the ethnic origin of all the population. There are people in the UK with ethnic origins from all over the world. In surveys, the most common ethnic description chosen is white, which includes people of European, Australian, Canadian, New Zealand and American descent. Other significant groups are those of Asian, black and mixed descent.

Within the UK, it is a legal requirement that men and women should not be discriminated against because of their gender or because they are, or are not, married. They have equal rights to work, own property, marry and divorce. If they are married, both parents are equally responsible for their children.

Women in Britain today make up about half of the workforce. On average, girls leave school with better qualifications than boys. More women than men study at university.

Employment opportunities for women are much greater than they were in the past. Women work in all sectors of the economy, and there are now more women in high-level positions than ever before, including senior managers in traditionally male-dominated occupations. Alongside this, men now work in more varied jobs than they did in the past.

It is no longer expected that women should stay at home and not work. Women often continue to work after having children. In many families today, both partners work and both share responsibility for childcare and household chores.